There are two categories of traditional handmade Japanese knives:

•   The Gyuto is in it's own category, because it is a nontraditional handmade knife.

The Honyaki is the knife that legends and myths are made of. This series of knives is a treasured part of Japanese Cultural heritage. The Honyaki is not intended for the casual chef. Traditionally, a Japanese Chef purchases a Honyaki knife after completing his or her apprenticeship. To celebrate this achievement, a silver ring may be placed between the buffalo bolster and the wooden mahogany handle. In Japanese tradition, it is considered very poor taste for a Chef to use the Honyaki before his or her apprenticeship is completed.

The Honyaki is an object of admiration that represents a long history of Japanese pride and craftsmanship. Encoded in the steel are centuries of experimentation, and a commitment to perfection. The Honyaki is forged from a single piece of steel, using the traditional method of differential hardening and tempering.  The Japanese have developed a method to insulate parts of the knife, so that the metal cools at different rates. There is no room for error, lest the blade be destroyed.  Only blacksmiths of great skill can master this method.  It is so specialized, Master Hide uses a different blacksmith for each type of steel.

There exists a belief that Japanese knives are very hard to sharpen; only in this case, is it true. The edge of the Honyaki is so hard, it will break, chip, or crack if dropped or abused. While the blade is delicate, it is also true that the harder the edge, the longer it maintains its sharpness. Thus, while the Honyaki requires skilled hands, it rewards the individual who treats its blade with respect.

The Honyaki is an object of skill and accomplishment, beauty, quality, and history. A Honyaki knife, given as a gift, represents all of this and more. Top Chefs use a Honyaki to symbolize their level of achievement, and a Honyaki is given, or collected, because of its beauty, function, history, and cultural inheritance. I cannot think of a better, more meaningful gift for a chef.

Like the Honyaki, the Kasumi is part of the Japanese cultural heritage, and is a traditional single bevel knife. Here, form and function dictate beauty. During the forging process, the Kasumi is formed by cold welding (hammering) a softer steel onto the hardened, supporting, high carbon steel edge. This softer steel forms the body and spine of the knife. The Honyaki, is differentially hardened and tempered, whereas the Kasumi's edge is uniformly hardened and tempered. The Honyaki is made from a single type and piece of steel, whereas a Kasumi is made with two different types of steel. Sharpening the Kasumi is easier, because only the cutting edge is high carbon hardened steel. The “Mist” or “fog” refers to the soft sheen where the softer steel meets the highly polished cutting edge. The sharpness of the Kasumi's edge is surpassed only by that of the Honyaki. The Kasumi, with a lightweight, water-resistant Magnolia handle, would be considered the standard knife of the professional and well equipped home kitchen. 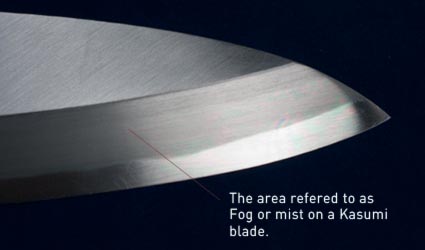 The traditional makers of Japanese knives have been pressured to respond to a market flooded with factory-made Western knives. The Masters of Sakai have responded with a double bevel knife, sharpened according to Japanese tradition, with a 70/30 angle. A Gyuto will have a western handle, whereas a Wa-gyuto will have a handmade Japanese handle. Some handmade Gyutos are incredibly thin, but still maintain overall rigidness, reducing the resistance, without compromising the edge or the strength. Some Gyutos are heaver and thicker, with improved taper. In short, if segments of the market demand a Western Chef's knife, the Masters of Sakai have found a way to improve, customize, and infuse that knife with their 600 years of blade-making knowledge. The result is simply the best Chef's knife you have ever sliced with.